I found one from a trip in 2006 when I spent about a week in Beijing, China [and two in Bhutan] and joined a small tour group bicycling through the hutongs of the old city.  I'm going to be having a show in late July at Artisan Gallery 218 with photos of bicycles from that and other trips over the years.  Details of the show will be on the website and in its Newsletter or you can contact me for further information. Blink Art is featuring some of my images on its website over the next two weeks.  Nice to have that recognition. 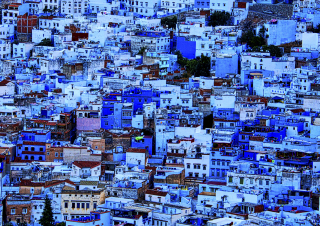 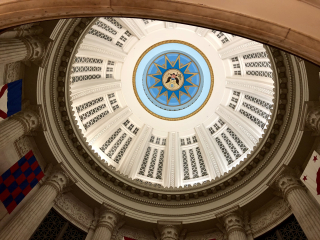 Our trip to Cuba,

Havana has some lovely architecture.  This corridor is one example. 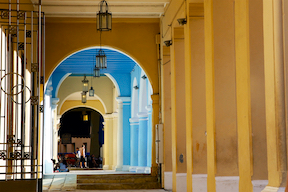 I just love this guy's face [and beard!].  He is apparently a magician and he spent alot of his time on the portico of the beer hall in the Plaza Vieja, talking to people and performing his magic. 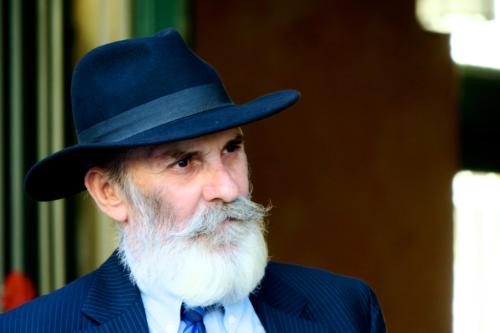 Our Visit to Cuba, continued

There are basically four main Plazas in old Havanna which were within easy walking distance. The one we visited first, Plaza de La Catedral, had, as you might expect, a cathedral at one end and then a number of other museums and interesting buildings and loads of tourists wandering about.

Our Visit to Cuba

In late December I, my husband and our daughter traveled to Cuba and over the next several days I'll hope to provide some descriptions and photographs from the journey. We started to plan back in June before the policy toward Cuba was changed.  We bought our flights to Miami and then to Havana and set off a few days after Christmas.

We categorized ourselves as a people-to-people mission, because it was true: My husband is a lawyer and we wanted to learn about the legal system, I am a photographer and wanted to take photographs and as soon as I can get them processed and reviewed hope to have several to show, and our daughter speaks fluent Spanish and frequently translated for us. We did ultimately make arrangements with a tour agency, Cuba Cultural Travel, to handle the details of the various requirements for our visit to Cuba. They did an excellent job of finding a good guide, a safe and good driver, a variety of experiences to enjoy. It is certainly much easier to travel with the help of a tour agency when you are not familiar with the country and need assistance with some of the paperwork and other requirements. 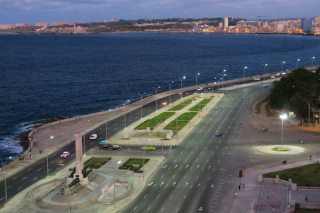 The Malecon & view of Havana 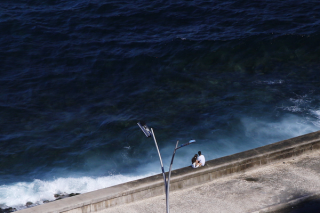 Young Lovers on the Malecon

[We lucked out with our first Casa Particular, a 15th floor penthouse apartment with a delightful host.  And wonderful views of the Atlantic abutting the northern shore of Havana, Cuba.]

Another colorful image in the calendar now for sale at Artisan Gallery 218. 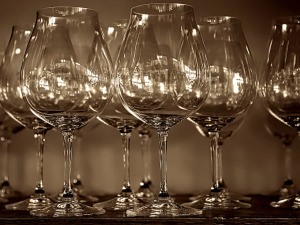 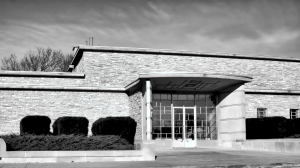 We visited Milan a few months ago and wandered the Galleria Vittorio Emanuelle - this is an image of the ceiling  vault and it's a favorite of mine, as it's almost a 3D image.  Is the center popping out toward you, or going away? 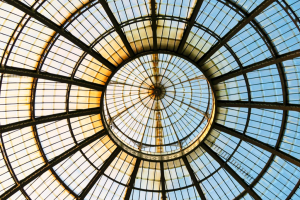 This is one of the images in a 2018 Calendar for sale at Artisan Gallery 218.  It's an image of some tiny model boats which were on display in Montreal during the Tall Ships festival earlier this year. 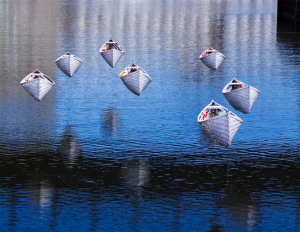 An outside image in black and white, the trees at Gray's Lake. 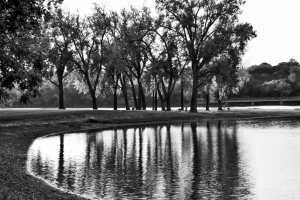 Another of the black and white images from the Des Moines project. 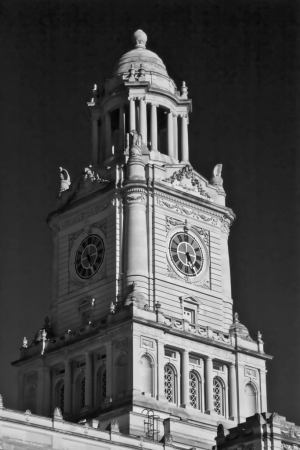 I had an interesting request from some customers at the gallery, Artisan Gallery 218.  They were looking for black and white images of iconic scenes in Des Moines.  Thinking about it a bit, I assured them I could locate a few.  I did so, they selected several and then I thought I'd share a few here.  I enjoyed the project and while I personally love color, some black and white images are special as well. 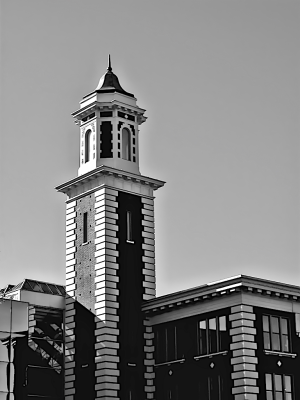 A report on the Eclipse of 2017 in Dubois, Wyoming

When the news of the August eclipse started going around last year, our daughter suggested that we should all meet in Wyoming to view it. Mark didn't want to go, but I was curious and thought it might be a special treat. So, I planned a trip with Kate - to meet in Salt Lake City and drive together the six or so hours to Dubois, Wyoming, a laid-back  town of less than 1,000 people.

As you might imagine, there was a pretty good crowd in Dubois for the occasion. We scouted locations from which to view the eclipse and found a perfect one at the Scenic Overlook in the middle of town. There were quite a few people there, but no one got in anyone's way and it really wasn't crowded given the nature of this event.

We arrived there about 9:30 am, as I wanted to set up and make sure all my cameras were working. I took my Canon 6D with its 300mm lens, Canon G3X [which has a 600 mm  lens and which took the best shots], and my iPhone 7+. I decided to put my 6D on my tripod and use the G3X as a handheld, every now and then using my iPhone.

To do this without damaging the cameras, I purchased a Mylar sheet 10" x 10" which I cut into pieces to cover the lenses of the cameras. I used rubber bands to attach the sheet to the two large cameras and the iPhone. I did have a set of glasses obtained through the eclipse2017.org site.  Frankly, the Mylar worked great for its purpose with the two larger cameras, but not so much with the iPhone.

As we waited, I took a number of pictures of the sun in its full glory, prior to the moon chomping through it. Then, a little after 10 o'clock, the moon started to cross the sun. It seemed to take a long time. But as the moon moved, the sky in the surrounding area got darker and darker and the temperature became cooler and cooler and then finally Totality occurred.

I made sure to get some pictures of the Totality and got a number of them with the full corona using the G3X camera. They're not fancy shots but I'm happy with them. While the moon was covering the sun, for approximately 2 minutes and 34 seconds, it was amazing how cold it got (must've been 10 to 15° below what it had been) and dark.  I looked behind me and took a picture of the far west horizon which seemed to show a sunset. That was rather odd, having the sun at almost noon in the sky and yet a sunset at the west horizon.

I'm glad I went, it was a unique experience and it was a lot of fun seeing family and friends there. I am going to collect some of these photos and post them. There are quite a few wonderful pictures by NASA, National Geographic, and many regular people who are much better photographers in these occasions. But I feel privileged to have taken some special shots.

I have posted a selection of some images on my gallery site.  I learned it's best to have a telephoto lens long enough [400mm or over] but even with other lenses you can get some good shots.  The gallery for the Eclipse images is:  http://gallery.journeyzing.com/Galleries/Newer-Work/Eclipse-2017-in-Dubois-Wyoming/

[pricing is special,  for family & friends].

Posted at 09:58 AM in Art/Photograph, Current Affairs, News and Events | Permalink | Comments (0)

We recently returned from a short trip to Montreal and Quebec City - perfect weather, we walked around both cities, but the following shot is just for fun, the Tall Ships were visiting Quebec City just before we arrived and in the basin some small boats were hung near a bridge - a joyous addition to the waterfront. 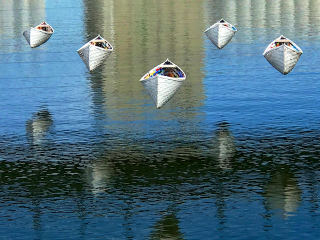 I just received word that one of my images, Abstract Lily Pads, was accepted as one of the 17 finalists in Ames's Water Plant Art Contest.  The City just completed a new Water Plant and as part of the project opened a contest to artists.  Selected 2-D pieces will be displayed during the Ribbon-cutting and Open House on August 26th and for two months afterward. I love this image, very abstract and yet very commonplace.  Napkins stacked in a wooden box in a Paris restaurant. 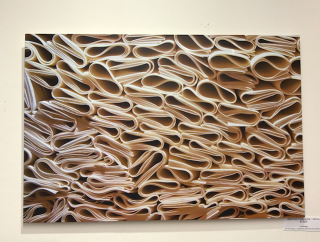 Posted at 08:03 AM in Art/Photograph, EFDP: Every Few Days Picture, Travel | Permalink | Comments (0)

For a quiet respite from the busy city, go to Lan Su Garden in Portland.  This is an image of one of the calligraphy desks.  A beautiful place. 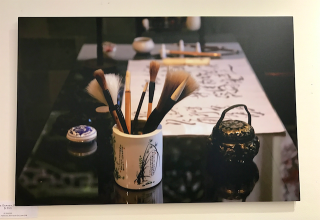 Posted at 08:00 AM in Art/Photograph, EFDP: Every Few Days Picture, Travel | Permalink | Comments (0)

I decided to take some of my images and print them to metal.  There are others, but I'm going to post some now on display at the Gallery: 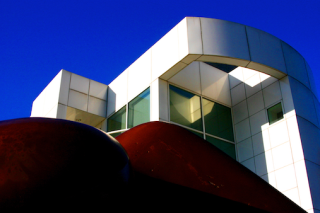 Abstract image, the result of playing with images and software 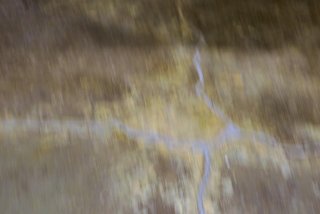 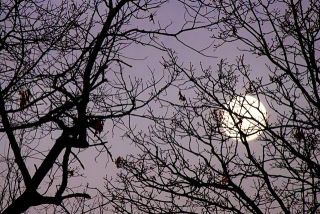 Sunset in the Sahara 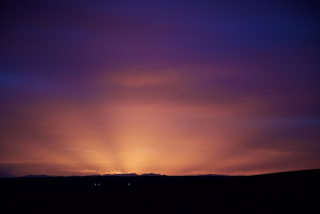 Bowls & Drums in the Sahara 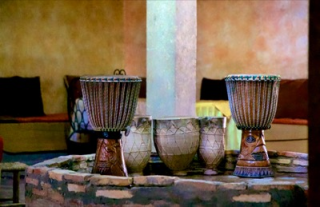 Inside the Hassan II Mosque 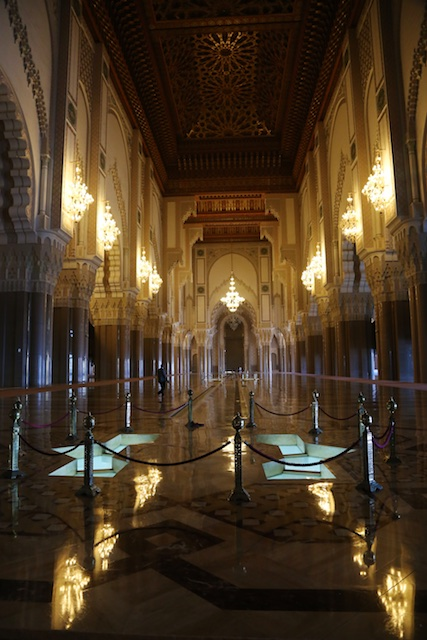